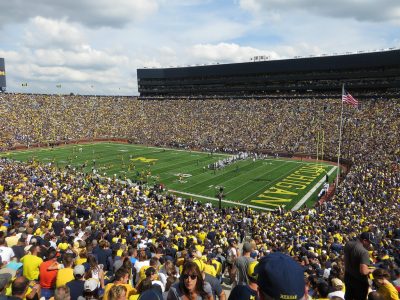 I am sure you have all realized during your time here in the USA what a huge part sport plays in American life!

It was once said that if the world ended and it was not reported on the Sports pages people in the USA would not know!!!?

To give you some perspective, at a College sports event in the United Kingdom, maybe Loughborough University against the University of Exeter, at either Soccer or Rugby maybe 400-500 people would watch the game. In the USA, when Michigan State University plays the University of Michigan at Football (US style) at the Big House in Ann Arbor, MI, the stadium can hold 107,601 people – though that number has been pushed to 115,109 people for a game against Notre Dame!!!

Almost the same enthusiasm is shown for High School sports.  In Texas, High School football is a way of life (movies and the TV shows will highlight this!). At the bigger high schools, crowds of over 50,000 will attend their football games! In England, at a high School soccer game, an old man and his dog may be the only people watching the game.

When I first came to the USA in 1973, I decided to become a fan of the Boston Red Sox baseball team. A lot of my other friends were New York Yankee fans and told me I was making a mistake becoming a Sox fan. In 1918, the Red Sox traded Babe Ruth to the New York Yankees (the Babe is considered one of the greatest – if not the greatest – baseball players of all time) and from 1918 through the current day, the Yankees have won 26 World Series championships. The Red Sox, after they traded the Babe, did not win a World Series for 86 years – it was known as the curse of the Bambino. Finally in 2004, the Sox won the World Series again having come back from 3 – 0 down in what was essentially the semi finals against the Yankees to  win that series 4-3. Each of those games lasted anywhere from 3 1/2 hours to 6 hours. This series was taken very seriously and was highlighted on most, if not all, national news channels.  When the Sox finally did win, the celebrations were enormous and emphasized how important sports really are to the American people.

For anyone planning on coming to the USA, I recommend you try and go and see a baseball, football, soccer game at whatever level you can – it is just a great part of Americana!!!